APPOINTED – Erik van den Berg as Chair of Board

January 2023 - TargED is pleased to announce the appointment of Erik van den Berg as Chair of its Supervisory Board. Click read more to find our full press release.

September 2022 - TargED is proud to present the installment of a Scientific Advisory Board dedicated to the development of Microlyse for treatment of Acute Ischemic Stroke.

August 2022 - TargED is very proud to share that another article that confirms the thrombolytic potential of Microlyse has been published in Blood journal. Click read more to find our full press release.

FUNDING - TargED raises €39 million in Series A round

February 2022 - TargED is extremely pleased and proud to have raised €39 million in a Series A investment round! Together with an international investor syndicate we’ll pursue our common goal: to bring Microlyse into clinical development!

TargED Biopharmaceuticals B.V. is a biotechnology company that develops first-in-class biological drugs to improve treatment of thrombosis. TargED stands for Targeted Enzyme Delivery. Their biological drugs are unique by using small antibodies (“VhH”) to deliver enzymes to sites of thrombosis, enabling ‘targeted’ thrombolysis. The lead compound is Microlyse, which is currently under development for thrombotic thrombocytopenic purpura (TTP) and Acute Ischemic Stroke (AIS). The objective is to accelerate thrombolysis in all forms of thrombosis, irrespective of the thrombus composition.  TargED, a spin-off of the University Medical Center Utrecht, was founded in July 2020 by Associate Professor at the Department of Clinical Chemistry and Haematology, Coen Maas, PhD, an expert in thrombosis and hemostasis, Steven de Maat, PhD, an expert in recombinant protein development and optimization, Marc van Moorsel, researcher with focus on Acute Ischemic Stroke and Kristof Vercruysse, with more than 20 years of experience in bringing biopharmaceutical compounds from pre-clinical proof of concept to market, most notably, Caplacizumab for Thrombotic Thrombocytopenic Purpura at Ablynx between 2007 and 2013.

Kristof Vercruysse has over 15 years of experience in bringing biopharmaceutical compounds from preclinical proof of concept towards market authorization. Kristof gained hands-on experience with the development of Caplacizumab for treatment of TTP at Ablynx between 2007 and 2013. Subsequently, he joined Sourcia, a full-service boutique CRO that delivers tailor-made clinical drug development for biotech companies. Kristof holds a Masters in Biomedical Science from Vrije Universiteit Brussel.

Marc van Moorsel holds a Masters in Innovation Sciences from Vrije Universiteit Amsterdam and is currently finishing his PhD at University Medical Centre Utrecht, investigating blood vessel markers towards innovative diagnostics and therapeutics in cardiovascular disease. Marc aims to combine his scientific understanding of drug development gained during his PhD with his passion: establishing a biopharmaceutical start-up.

Steven de Maat is an expert in developing and improving recombinant proteins – including  nanobodies – in various expression systems. Steven holds a Masters in Biomolecular Sciences from Utrecht University and received his PhD in 2016 from University Medical Centre Utrecht. Together with Coen Maas, Steven is inventor of two patents. In addition, he received his VENI laureate in 2019 on hematology-related blood proteins.

Coen Maas is an expert in thrombosis and hemostasis and associate professor at University Medical Centre Utrecht. Coen studies multiple rare, hematological diseases. Coen is (co)author of >100 scientific publications and has been invited for >45 scientific presentations. In addition, he is inventor of two patents, one of which that covers our lead compound. Coen holds a Masters in Medical Biology and received his PhD in 2008, both at University Medical Centre Utrecht.

Emile van Corven holds a Masters Degree in Biology/Biochemistry and obtained his PhD in 1987. He decided to enter the biopharmaceutical industry in 1992 and has fulfilled several positions with increasing responsibility, up to Chief Development Officer/Managing Director. With more than 30 years of Biotech experience, he finally decided to start as an independent consultant in April 2022 and he has joined TargED as Vice President Chemistry Manufacturing & Control.

Danielle Versluis holds a Bachelors Degree in Biomedical Sciences and currently finishes her Masters in Biology of Diseases, both at Utrecht University (the Netherlands). Earlier, she performed two internships (1 year each). The former focussed on pyruvate kinase deficiency, the latter on regenerative orthopaedics. Her scientific interests lays with Cardiovascular disorders.

Eva Zethof holds a dual Associate degree from Schoevers (the Netherlands) in Office Management and Medical Secretary. Eva has >5 years of experience as Management Assistant in the pharmaceutical industry. Previously she worked for Guerbet (Gorinchem, the Netherlands), where she assisted various members of the Management Team and the Sales Team. In addition, she implemented a new CRM system and was responsible for company compliance and sponsorships (CGR).

Sarah Mc Fie holds degrees in Molecular Biology, Neuroscience and Neuropsychology and obtained her PhD from the University of Cape Town, South Africa. Her PhD investigated the genetic risk factors for head injury outcome. In addition, she completed a one-year Clinical Neuropsychology internship in the Neurology Ward of the Groote Schuur Hospital and a Postdoctoral Fellowship in the Neurosurgery department of the University of Cape Town. Her passion lies in medical science and scientific communication.

Volker Laux is an expert in thrombosis and hemostatis, who has been working as a Pharmacologist for >25 years. Until 2019, he was Vice President for Hemostatic & Acute Care Diseases at Bayer Pharma in Wuppertal and San Francisco, and from 2020-2021 Division Head of Preclinical Research at the Fraunhofer Institute for Translational Medicine & Pharmacology in Frankfurt. He has been responsible for the translation of several discovery projects into development in thrombosis, hemophilia, ischemic stroke and Intensive care research.

Xander Speet holds a Bachelor Degree in Organic Chemistry from Noordelijke Hogeschool Leeuwarden, the Netherlands with a minor in Drug Design & Synthesis. He has been working in the biopharmaceutical industry since 2010 with previous roles as Project Manager Chemistry, Manufacturing & Controls (CMC) and Associate Director of Drug Product Manufacturing, Clinical Supplies & Logistics. Xander has proven to be a talented Project Manager with a great eye for detail.

Marèl de Wit holds a Masters Degree in Medical Biology and obtained her PhD focussing on Infectious Diseases and Immunology from Utrecht University, the Netherlands. Marèl is a quality oriented Regulatory professional with >15 years of experience in the Biological field. She has previously fulfilled several Regulatory Affairs positions, both in pre- and post-marketing, with increasing responsibility and now fulfills the position of Director Regulatory Affairs at TargED.

Johan Renes is a Partner at Simmons & Simmons in Amsterdam since May 2021, and is TargED’s go-to partner when it comes to Intellectual Property practices. He has >30 years of experience in the Life Sciences industry and has been involved in international patent litigation. As a former life science entrepeneur, Johan is also experienced in the commercial and strategic aspects of drug development. He has guided companies from inception to IPO and beyond, negotiating licensing and collaboration deals, securing investments and implementing aligned R&D, business and IP strategies.

Our lead product, Microlyse, is a first-in-class proprietary clot-busting compound which binds to a protein present in all forms of thrombosis. Microlyse is the first compound to achieve targeted enzyme delivery, using a single domain antibody (VhH), directly to blood clots. Due to the targeted nature of the therapy, it is expected to lead to a superior side effect profile alongside the potential for exceptional potency compared to current agents. Microlyse’s unique mechanism of action allows for potential applications in a variety of indications involving thrombosis, including the life-threatening disease aTTP. The ground-breaking work demonstrating that Microlyse specifically targets blood clots leading to their desolution faster and safer compared to standard of care recently featured on the cover of the journal Blood (Microlyse: a thrombolytic agent that targets VWF for clearance of microvascular thrombosis).

The human body controls rupturing of vessels by beneficial wound healing. Wound healing is initiated by the binding of platelets to unrolled Von Willebrand Factor (VWF), a multimeric blood protein. The developing molecular ‘band-aid’ can later be strengthened by the formation of fibrin. When this process is uncontrolled, obstructive blood clots can develop, known as ‘thrombosis’. These clots prevent sufficient blood supply to organs. Dependent on the affected organ, this can result in for example stroke, myocardial infarction or kidney failure. Interestingly, thrombi always contain platelets and VWF, but they do not always contain fibrin. We are currently developing Microlyse for the thrombotic indications TTP and acute ischemic stroke.

Thrombotic Thrombocytopenic Purpura (TTP)
TTP has an orphan EMA/FDA designation and it affects 2-10 patients per million per year. In physiology, the enzyme ADAMTS13 cleaves VWF and prevents progressing into pathological thrombosis. In TTP patients, ADAMTS13 activity is impaired. Consequently, TTP patients experience acute attacks during which they develop countless thrombi composed of ultra large VWF molecules (UL-VWF) and platelets. These thrombi generally affect the microvasculature of organs such as the kidneys, heart and brain, leading to tissue ischemia and multi-organ failure. TTP patients risk shortened life expectancy and long-term complications. When untreated, mortality is 90%.

Microlyse is revolutionary in inducing the active degradation of VWF strands. As a result, the duration of tissue ischemia can be reduced, resulting in less organ failure and lower mortality. 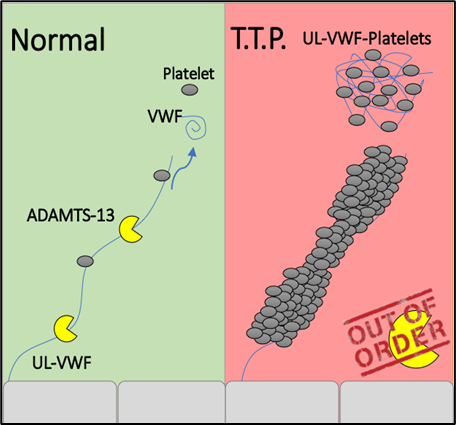 The reasons for the limited efficacy of tPA are still largely unclear. However, tPA requires the availability of fibrin in order to degrade thrombi. In AIS, thrombi often originate from vessel damage elsewhere, after which thrombi-parts dislodge, embolize and occlude arteries in the brain. These thrombi always contain VWF, but the presence of fibrin is uncertain and varies between cases. We and others therefore suggest that degrading VWF in addition to fibrin forms an attractive strategy to treat thrombosis in stroke.